Horse Owners in Kentucky Watch Out for This Little Killer

It is not often that people should be afraid of a small insect like the E-Tent Caterpillar, but horse owners should be. In Kentucky, these tent caterpillars are responsible for the death's of hundreds of thoroughbred foals. According to Lee Townsend, an entomologist at the University of Kentucky (in an article from Bloodhorse.com), researchers have conducted studies that revealed horses inadvertently eat the caterpillars. When they eat them, the hairs on the caterpillar get embedded into the lining of the horse's alimentary tract, which causes the protective barrier to be breached. Normal alimentary tract bacteria may gain access to and reproduce in sites with reduced immunity, such as the fetus and placenta. Eastern tent caterpillars are black with a white stripe and build their nests in the crotches of trees, preferably in places the sunshine hits. Its cousins, the forest tent caterpillars, look similar to the eastern but have "key hole" shapes on their backs and adults have blue stripes on their sides. The caterpillars mostly prefer the Black Cherry, Choke Cherry and Scrub Apple trees. The black cherry trees and choke cherry trees, should be removed from fence lines, because of the caterpillars and the damaged leaves produce cyanide. 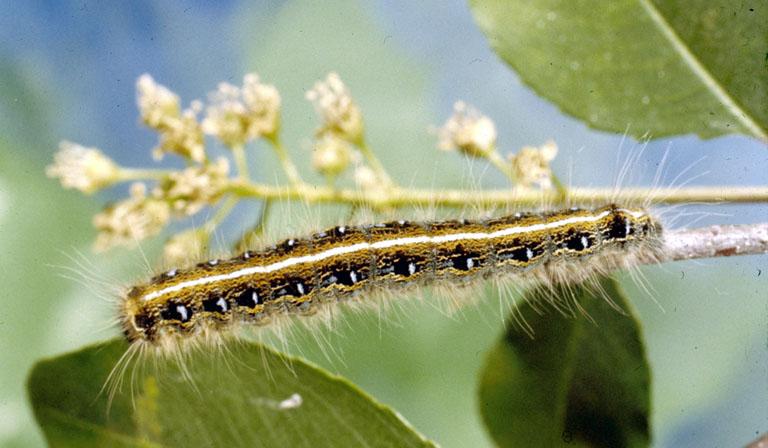 When mature, the large, hairy caterpillars wander from their developmental sites along fence lines. Townsend said horse owners and farm managers with pregnant mares should begin to monitor fence lines containing wild cherry and other host trees in about 10 days. They should look for small tents produced by developing caterpillars. If practical, farm managers should plan to move pregnant mares from areas where the trees are abundant to minimize the chance of caterpillar exposure. The threat is greatest when the mature tent caterpillar wanders away from the trees and search to find places to pupate and then transform to the moth stage. Another threat to the well-being of horses are black cherry trees and choke cherry trees, they should be removed from fence lines, because the damaged leaves produce cyanide.

Louisville Tree Service, LLC who serves the Jefferson, Oldham, & Shelby Counties can help local horse owners to eliminate tent caterpillars by pruning trees and applying insecticides near barns and fences. Early detection is key when it comes to controlling the infestation. It's better to catch and control their growth before they spread, multiply and age. Once that happens, they are much harder to kill with insecticides. Call us at 502-515-8199 for a free estimate.